skip to main | skip to sidebar

Role Reversal and Self Handicapping in Play

Chris asked for some more information on self handicapping in play and was kind enough to take the photos that are attached to this post that illustrate self handicapping between an adult dog and a puppy. Great shots Chris and four legged family and friends : )  Thanks to Diesel and Gypsy for playing the roles perfectly.

Some of the elements of good healthy play were touched on in an earlier Paws for Thought on 'Play or Warming up for a Fight?' Since then we’ve looked at the play bow, calming signals and also the concept of a puppy licence and its loss. All of these give you things to watch for and think about when observing your dog/s interacting with people, dogs and other animals. This post adds more information on two of the most important aspects of good healthy dog play – self handicapping and role reversal.

Self-handicapping is where an stronger, faster, more skilled dog self inhibits their speed, strength and even play style so that they can better match the abilities of their play partner. If it helps think of a parent deliberately not winning every card game they play with their child.

As Dr Camille Ward states "Even though on first take, play fighting and real fighting may look similar, there are some key differences between the two. For example, during play, dogs often engage in self-handicapping behavior. Self-handicapping occurs when one player voluntarily puts herself in a vulnerable or disadvantaged position in order to give her partner a competitive advantage."

Self-handicapping though is not as easy as it sounds. It requires a dog to know their own abilities, to judge the abilities of the other party and then adjust their behaviour to minimise the chance of injury or frightening the other party and maximise the chances of play continuing. You see it between dogs and puppies (see the attached photos from Chris to illustrate this) but you also see it between adult dogs and between dogs and other animals such as cats or kittens and even between dogs and humans, and particularly with children. All of this raises many questions (largely unanswered) about dogs and their image of self, others and even feelings. 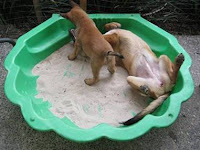 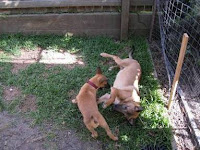 The other thing you need to know about self-handicapping is that it requires immense self-control. This is a skill that well socialised dogs learn from other great dog communicators. It’s also something that becomes harder and harder to do as arousal levels rise. So don’t be surprised if your dog can’t maintain self-handicapping for long periods of time and therefore quits the scene, calls off the playtime, gives signals that they need a time out or even appears to get quite rough quite quickly. All this is another good reason to:

For other examples of self-handicapping at work check out the videos:

Role Reversal
Role reversal in many ways is associated with self-handicapping. In role reversal a more dominant/confident dog will voluntarily offer behaviours that you would not see them doing in a real situation such as fight with the dog that they are playing with. For instance when playing the confident dog may roll on their belly, or turn and run off inviting their playmate to chase them for a change. It appears that the strategy used to ensure that the other party continues to play – and at the same time it gives the other dog a chance to practice more confident behaviours but in a low risk environment – after all it’s all in the name of play (at least until arousal causes the game to fall apart).

Role reversal is why you’ll see socially healthy dogs taking turns in being chased, being on the top and bottom of a wrestle and applying inhibited bites. If you don’t see role reversal and one dog or puppy is continually at the bottom of the pileup or the only one being chased and never given the opportunity to chase then this is not an example of healthy play – get in there and address the situation. It may be that one or more of the other dogs is being a bully (or monstering as I think Grant calls it). You may need to consider a different mix of play mates. You may also need to address the behaviour of the bully – particularly if they belong to you.

Keep an eye out next time you watch your dog/s playing with other dogs and even with children and see how they modify their play. You might be surprised what you see when you’re looking for it. There is so much more to these dogs we take for granted, then we may ever know.